Why is HMRC taking so long to process R&D claims?

Why is HMRC taking so long to process R&D claims?

If you are are preparing R&D claims for clients, or simply have clients who are making R&D claims, you cannot have missed the fact that HMRC’s processing of claims (for all but the largest companies) has all but ground to a halt.

HMRC provides a weekly update on its progress with R&D claims, so let’s take a look at those numbers. 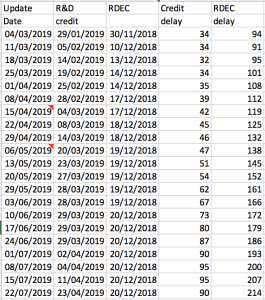 Note that the dates are as provided by HMRC, I have calculated the delay.

R&D credit claims are currently taking 90 days – yes, ninety – to process. That’s not the whole story unfortunately, there can be a further delay of around 5 working days once the claim is ‘processed before the payment is actually made. To put this into some context, HMRC’s stated objective is to pay credit claims, or contact the company, within 28 days in 95% of cases. Well, something has clearly gone wrong.

What is arguably worse is that HMRC’s efforts to get back on track (which are clearly not working) seem to involve ignoring RDEC claims completely. Currently waiting 214 days, no movement at all in the last 6 weeks and a movement of only 1 week’s worth of claims in the last 18 weeks.

So, to the question in the title of this blog post. Well, HMRC had blamed the influx of claims for 31 March year ends. Seriously? Were they really not expecting those claims? That excuse has now disappeared from the emails so there must be another reason. Personally, I feel sure this is all down to an under resourced team that is struggling to deal with an understandable desire to address poor claims. Unfortunately, everyone is suffering as a result. This is a relief that the government is keen to promote as part of its overall package to increase spending on R&D and innovation in the UK. HMRC is supposed to be supporting companies making claims; there has to be a better way.