UK Patent Box – will it work?

Home/Uncategorized/UK Patent Box – will it work?
­
Previous Next

UK Patent Box – will it work?

I attended a presentation on the latest Patent Box proposals at The Treasury earlier this week. It was a very well organised meeting and extremely useful. It has not, however, changed my concern that the UK’s Patent Box regime is likely to fail to meet the Government’s policy objectives.
Those objectives, taken straight from one of the slides used in Tuesday’s presentation, are:
All very laudable objectives and I am sure that everyone would support them.  Indeed, I should stress at this point that I am not opposed in any way to the introduction of a Patent Box in the UK, far from it. My concern is simply that I do not believe the Patent Box as currently designed will achieve those objectives.
I think that the reasons for my concern are that once again it feels like we have an incentive/relief provision that has been developed through a process of serious tension. Tension between the desire on the one hand to have a generous regime that actually encourages business to hold patents in the UK and the concern on the other hand that it shouldn’t cost too much (which in reality is inevitably going to be a lot less than is actually needed). Add to this a healthy dose of paranoia that the rules will be ‘abused’ and you get to where we are now. Now I know that the Treasury’s finances are not limitless and that any relief has to be ‘affordable’ but if the Government really believes we need a Patent Box (and I think we do) then it must be in the country’s interests to have a good one.
Let’s look at the areas of the regime that cause me most concern in this respect. The first thing is the benefit obtained from being within the Box. The headline rate of 10% sounds pretty good (although not as good as in some other countries) but look closely at the rules for computing the Patent Box Profit that will actually be taxed at this rate; many patent-owning companies are likely to find that the actual savings are not quite so impressive. As an aside, it is interesting to see how HMT presented this in one of their slides from Tuesday’s meeting (the figure of 23% that appears on the slide is the CT rate for 2014): 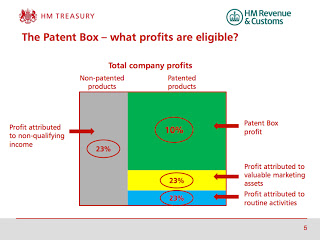 Note how big a chunk of total profits appear to go into the Box!
Then there is the computational process itself. For the larger companies with internal resource and the budget for external advisers, this is surmountable. However, I fear that many SMEs will take one look at the legislation and decide that it just looks too complex. Now, to be fair to HMRC, they recognise that this could be an issue and are keen to develop robust and useful guidance to help SMEs (in particular) self assess their Patent Box position. Indeed, HMRC has asked business and advisers for assistance in drafting this guidance (something that I will be participating in).

I very much welcome the introduction of a Patent Box into the UK tax system and, despite my concerns, I would rather we had something than nothing. At least this way we can work on improving it!